The rise and rise of the robotic workforce 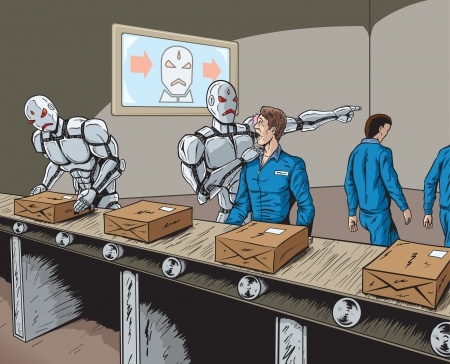 It’s being dubbed the Fourth Industrial Revolution: the explosion of robots, machines, algorithms and artificial intelligence (AI) in the workplace is coming.  There’s been a lot of recent speculation about how robotics and automation will change the landscape of employment, and the professions that could become obsolete as a result.

And it’s already started.  We’re all familiar with those annoying “unexpected item in the bagging area” self-service supermarket checkouts, or the big robots used on the production line in factories making cars and other complex products.  In the supermarket, now just one checkout assistant can manage 6 or more tills, or cars and machines can be assembled safely, with every one being turned out to the same standard.

So what jobs will be next on the chopping block in this technological revolution?  By and large, the main professions under threat are ones that involve repetitive tasks – that could be inputting data, preparing spreadsheets and reports and other administrative duties, retail jobs, manufacturing and even some more complex analytical roles that could be better served by an algorithm doing all the hard work.  The safer jobs are those that involve good interpersonal interaction and empathy, something machines can’t grasp, or require lots of creativity. There are no hard-and-fast rules: some media companies in the US are using a computer program to write their sports reports, to cut down on the costs of sending journalists out to watch games.

A new workplace could now involve a group of robots that carry out the bulk of the work, a human face to handle any complex issues with customers, an engineer or technician to make sure the machines stay working, and a creative, entrepreneurial force behind the business to drive it forward.  Somewhere that might have employed 10-15 people, could cut that back to a staff of 3 to 5.

Analysts have mixed views on whether or not mass unemployment is on the horizon.  Many lower skilled jobs in some sectors will disappear in favour of automation, with just people supervising the machines left in the workplace. Some are predicting widening inequality as a result of the change, and even social unrest, as the displaced workforce could amount to up to 50 or 60 percent in some areas.

But, lots of new jobs will be created by the developments in technology.  It’s thought that, of those currently in education, 60% will in the future be working in professions that don’t yet exist.  New professions will be created to support a new robotic workforce – engineers, programmers, designers, cyber security personnel, perhaps even voice actors and writers to put words into the mouths (or should that be speakers!) of machines.

One thing keeping a robotic workforce from taking over is trust.  Even if equally or more competent than a person, would you rather be greeted by a robotic reception (Nanyang University in Singapore has one to showcase their talents) or a human smile? Even though they’ll do the same calculations, would you prefer your financial advice from a computerised or a human accountant? The human touch is one thing that will keep a lot of people in their jobs. And it will be something people need to be able to offer to employers too.

Even in caring professions, robots and machines have been making their mark.  An automated dispensary in a hospital pharmacy will keep medicines secure and eliminate errors in handling our prescriptions, even knowing to order certain medications if they become depleted in stock. Applications in direct caring roles however have yet to make their mark.  So-called “Personal Healthcare Companions” are robots to help patients with chronic disease manage their medications and offer words of support and encouragement to keep spirits up.  But as anyone who has ever tried googling their symptoms (going from having a bit of a sniffle to a rare tropical disease in about 5 minutes) will know, diagnosing illnesses as doing the hard work of highly trained doctors and nurses is still a bit beyond the capability of AI.

Scariest of all perhaps are the nanny robots, developed in Japan to assist in childcare, while no doubt a blessing for busy Japanese mums, it’s raised ethical concerns about the overuse of robots and AI in certain fields, with speculation that over-reliance on these machines in parenting could lead to children having long term mental health problems.

So if you’re concerned about the future of your role, things perhaps aren’t as bleak as some news stories would have you believe. If you’ve got good people skills, or a willingness to retrain to keep yourself at the forefront of developments, then things are looking very optimistic.  And if not, you can be safe in the knowledge that, in one of the plants, Mercedes recently ‘laid off’ a chunk of its robotic workforce saying that certain tasks were done much better with old-fashioned human dexterity!